In this article, we'll be discussing on the steps to deploy a sample / basic Python Web-app on Heroku. Firstly we'll discuss on the Introduction to the article. Secondly, This section is for setting the expectation of the reader as well to make sure they are in the same page of understanding and they are following the article. After that, we'll understand the web-app file structure for the same. Later we'll look into the commands for creating & deploying a app at Heroku.

Following are the sections of this article:-

In this article you will learn how to deploy a Python Web-app built using Flask web-framework to Heroku.
Nowadays there is no business that doesn't have a web app to help it a reach greater audience, or maybe provide its services through an online portal anywhere in the globe. Let us go-through the introduction part of Python, & Heroku.

Following are few prerequisites, that we are making so that the readers are understand or need to go-through before proceeding with the article,

I. The Desktop OS is - Ubuntu, but most of the steps holds good for other operating system as well.
II. You are having account at Heroku platform. If not please create one by clicking here. Also install Heroku CLI.
III. You have the basic understanding of Python Programming.
IV. You are familiar with Linux Command line interface and install Heroku CLI.
V. Git installed & you have basic understanding with Git commands.
VI. A Python version >= 3.7 installed on your machine and following code inside the directory(sample-web-app) as mentioned in the next section.

Following is the File structure for our web-app without including the virtual environment, that is required to deploy the same on the Heroku platform.

From the above File structure, Following is the brief description. We'll see detailed steps on these in the next section.

4. Create and Deploy app at Heroku

Following are the series of steps to Create & Deploy the web-app at Heroku.
Created a directory sample-web-app, under this directory we perform all the next steps.

You can log in by typing the following command in the terminal:

2. Create a web app on Heroku

After successful login to your Heroku account, now create a new application on Heroku using the following command:

Create a virtual environment with venv and install Flask and Gunicorn web server, then install it by using the following command:

After activating virtual environment, you should be able to see that appear at the left hand side of your terminal, like (myenv)/sample-web-app$.

To generate the requirement.txt file, you can use the following command,

Procfile is a Process file that is required for all Heroku applications. Procfile specifies the commands that are executed by the app on startup. Enter the following in Procfile:

Lets check whether we got the entry on the above line inside the Procfile,

Here, the app is the name of your main app (.py) file. In my case, it is app.py.
NOTE: you have to create a Procfile without any file extensions.

After creating a runtime.txt, add your build Python version like below:

where python-3.7.5, is my current python version
Now, we are all set!

8. Finally Push the code to master Branch of Heroku git

Next, it is time to commit your final code using the following steps:

From the above series of command at terminal, it pushes your local code to the Heroku's git repository of your app. This is the git repository which was explicitly created while we created our app.
Here heroku git:remote -a YourAppName, replace YourAppName with your heroku app, mine is mysample-web-app
Your app is live now, and you can see your web app using the generated URL.

In the log that has been shown in the console after successfully executing the above command you will find a link for your application https://{your-project-name}.herokuapp.com/. This link was also created with the git link while we run the command - heroku create < your_app_name >.
Following is the output at browser, 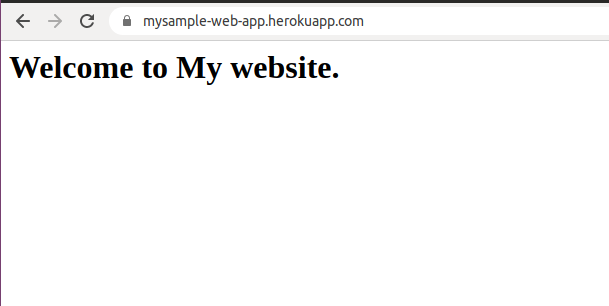 we can see that the app is up and running!

At last we are at the end of the article.In this article, We have learned some basic introduction on Python, web-frameworks, Cloud service models and Heroku's introduction. In later stage we have seen the sample web-app's file structure for deploying the same to Heroku. Lastly we have seen the detail guide for creating and deploying the web-app to the Heroku platform. Hope this was an informative article!

StringBuilder is a standard library class in Java which can be used in handling string data and is alternative to String Buffer and String data type.