then get back to this for better comprehension.

The above diagram summarises how breadth first search takes place in graph.

The node from which we start our breadth first search traversal is called the root
or source node.

The level of a node is defined by 1 + the number of connections between the node and the root.

Any node whose left and right child are null is called the leaf node of the graph.

Step 2 : Pop the first element in the queue and
enqueue all the nodes which are directly connected to the
popped element.

Step 3 : Set the level of all the element which are enqueued in the
previos Step to 1 more than element popped in the second step.

Step 4 : Repeat process 2 and 3 until the queue is empty.

The graph shown below is a 3 level graph ( level 0 , 1 and 2 ) and we can find the level of each node in the graph using breadth first search .

First we will create the directed graph and the process of creation of graph is shown in the code section.

we will also create a level vector which stores the level of each node . 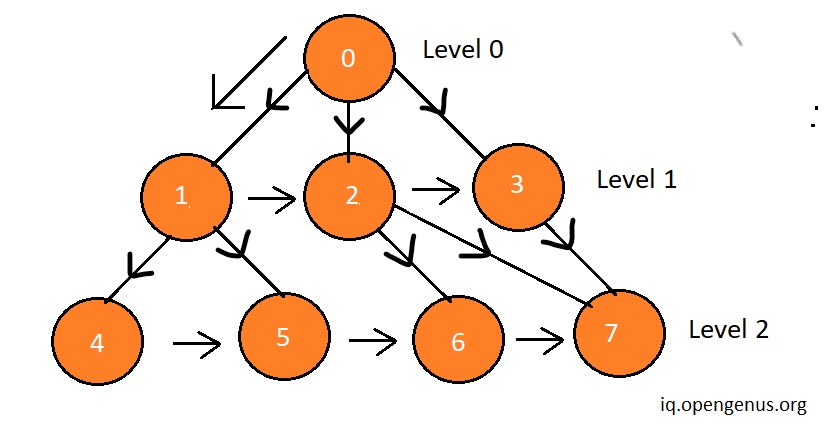 To make sure that you understand the concepts answer these queshions:

Q1. Which data structure is used for implementing the breadth first search ?

Q2. what is the time and space complexity required for applying level traversal in breadth first search ?

Q3. How is level defined in the breadth first search ?

Given a Linked list, find out whether it contains a loop or not. If it does, then remove the loop and make the last node point to NULL.

Through this article, you will get a good insight into "How Email Systems like GMail and Outlook are Designed?". The key is to understand that email is a default way of communication on the web and is not same as a instant messaging platform.