We are given the root of a tree, and an integer k. We need to print all the nodes which are a distance k from the root.

For example, if the given tree is: 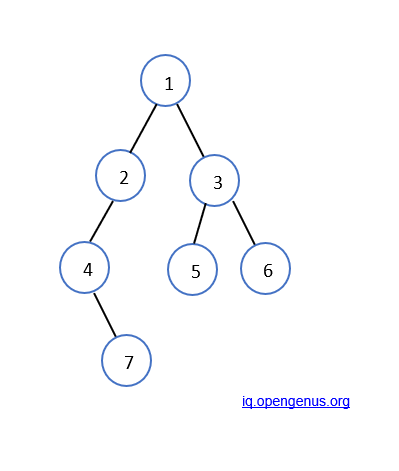 This problem can be solved using a general traversal technique like:

In Level Order traversal, we shall get all nodes at level K.

This problem can be easily solved using general recursion:

Let us walk through the procedure with our given example.

The following graph depicts the recursion route. (The function name printNodes is abbreviated to pN)

The following is the code to the above problem in C++

Hence, we have found out how to find nodes at a distance of k from the root node, using recursion.

Understand how to find ancestors of a given node in a binary tree recursively and iteratively in linear time O(N).

In this problem, we are given a binary tree and a key k. We need to find out all the ancestors of node k. We have used a recursive approach.

OpenGenus IQ: Computing Expertise & Legacy
—
Find nodes which are at a distance k from root in a Binary Tree
Share this